Jonathan Taylor Is Exactly Who We Thought He Was

Jonathan Taylor has been a hot devy item for two full seasons now, and it is highly likely the time has finally come for him to make his much anticipated graduation to the NFL. While it is more than likely Taylor will be playing on Sundays next season, we will get one more opportunity to watch him play in a Badgers uniform. Wisconsin plays Oregon in the Rose Bowl on New Year’s Day 2020.

The above was from December 2019. Flash forward to March 2020. We got to see Taylor in a college uniform one last time in the Rose Bowl. He had a pedestrian 94 yards on 21 carries in that game, but chewed up 43 yards on his pair of receptions. This success in the passing game speaks to the only area anyone could even reasonably second guess his ability (and even that was only because of a lack of opportunity). Now armed with numbers from the combine, we get to cement the analysis on him: Taylor is exactly who we thought he was.

Taylor was born and raised in New Jersey and attended Salem High School. He compiled 4,642 yards and 51 touchdowns in his high school career. The high school career numbers are not eye-popping, but the numbers from his senior season are impressive. He set the New Jersey state record in rushing yards that year with 2,815, scored 37 touchdowns and averaged 234.6 yards per game. Despite this incredible season, he was just a three-star recruit, and the 24th ranked running back in the class according to 247 Sports Composite. With this grade, he initially committed to play at home town Rutgers, but ultimately made the best decision possible, and opted for Wisconsin. 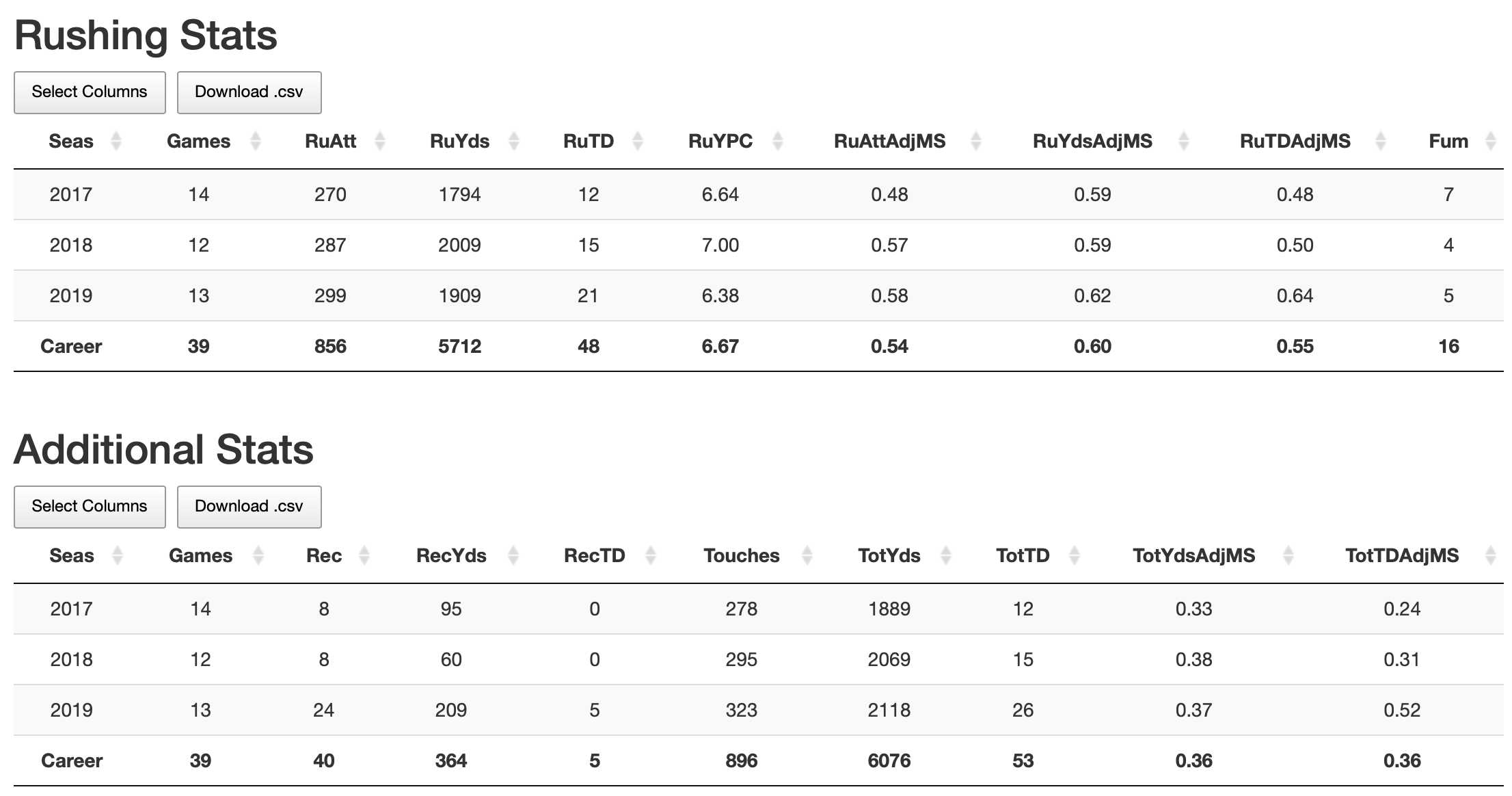 When Taylor arrived at Wisconsin, nothing was guaranteed for him. He was one of five backs in consideration for playing time in 2017. He turned heads in his first scrimmage, taking his first carry against the first-team defensive unit 70 yards to the house, and added a receiving score.

Taylor only built momentum from that point forward. He emerged on the college football scene in just his second college game with a 223-yard, three-touchdown performance against Florida Atlantic. By his seventh game as a freshman, he’d hit the 1,000-yard mark, joining Emmitt Smith, Marshall Faulk, Adrian Peterson and two others as the fastest ever to do so. He was a Doak Walker Award Finalist in 2017, but had stiff competition in Saquon Barkley and Bryce Love, and fell short of winning. This was corrected in both 2018 and 2019 when he won the award as the nation’s top running back.

The first Doak Walker award-winning season of 2018 saw him lead the (FBS) nation in both rushing attempts and yards. He totaled 307 carries for 2,194 yards for 7.1 YPC, which was top ten in the nation. Also top ten in the nation were his 16 touchdowns. This season added him to the list of Badgers to rush for 2,000 yards. The first two were Ron Dayne and Melvin Gordon.

2018 set the bar incredibly high for Taylor, but 2019 was an even more impressive season. He got the opportunity to show off his receiving chops in his junior season. Despite rushing for 100 fewer yards than he did in 2018, his total yardage output was 49 yards better and his touchdown output was through the roof. His 24/209/5 receiving line is mouth-watering, mostly due to his TD rate being 20.8%. He scored more often than every fifth reception and looked great doing it, which more than proves he’s got receiving talent. After the 2019 season, Taylor has the most career rushing yards among all FBS backs who played only three seasons.

Wisconsin has had no shortage of NFL running back prospects in recent years. The Badgers love to run the ball and Taylor was the perfect marriage for them. The record-breaking numbers were aided by volume at Wisconsin, but to drop these numbers on a Big Ten schedule is nearly unheard of. Simply put, this happened because Taylor is the perfect college running back and NFL prospect.

When you combine Grinding The Mocks draft projection of 41st overall with the RotoViz Box Score Scout, we find that Taylor compares favorably to an impressive list:

While I believe the draft projection of 41 will ultimately be too low on Taylor, there are comps to celebrate on this list. Taylor is the cream of a crop that includes Christian McCaffrey.[1]The Bishop Sankey and Montee Ball comps remind us that no one is a sure thing. And none of these comps take athleticism into account, as we don’t yet have those numbers for Taylor. If Taylor ends up commanding first-round draft capital, those who prefer D’Andre Swift as the top back may be forced to reconsider.

It is nearly impossible to envision a scenario where Taylor falls past the second round. It is much more likely that he is a first-round pick. If we tweak his projected draft capital to the first round in the Box Score Scout, comps such as Ezekiel Elliott and Dalvin Cook pop up near the top. I will never use the term “can’t miss” for a prospect, but with that said, Taylor is as close to the perfect running back prospect as we will find. He should be a bell cow in the NFL for years.

Taylor confirmed what we thought/knew about him entering the athletic testing in Indianapolis: he is a freak. 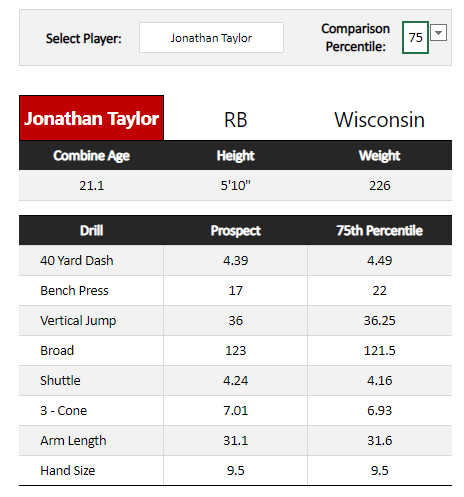 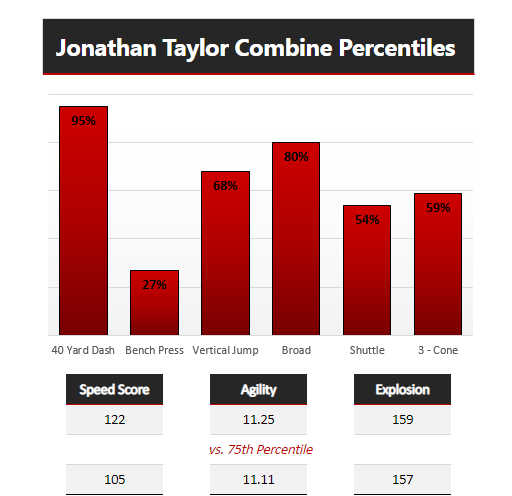 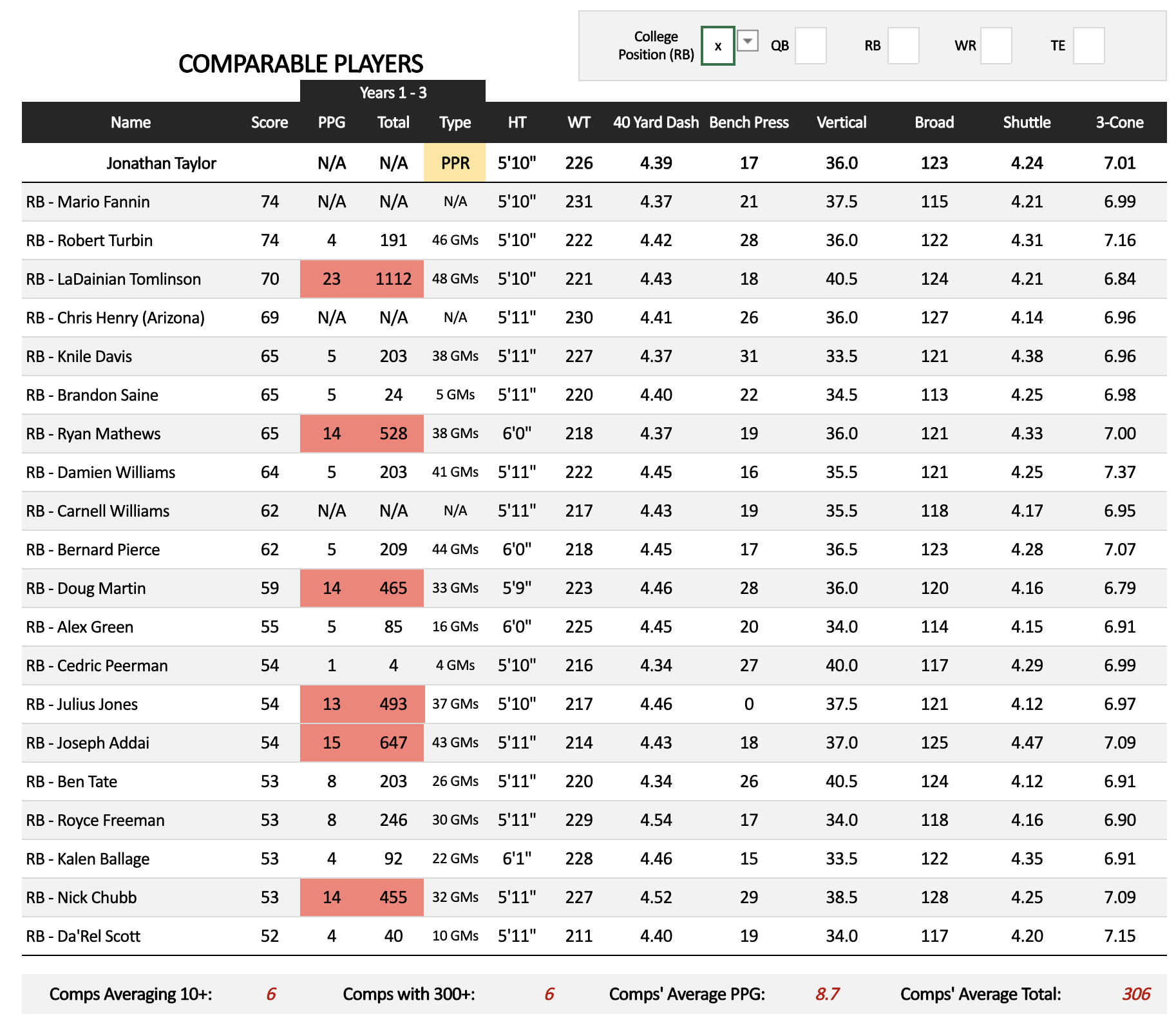 As you can see, his testing was everything we thought and hoped for, and has likely cemented himself as the first running back off the board and likely in the first round. The comps of LaDainian Tomlinson, Nick Chubb and even Cadillac Williams are welcome ones to stumble upon.

When overlaying his athletic testing with the incredible film he’s put together, he looks like an easy 1.01 selection. Barkley was a consensus 1.01 pick and still easily carries top-five dynasty value. Jacobs was far from the consensus at the top spot and does not carry the same value Barkley does, despite being a high-end asset. That Taylor is not the consensus 1.01 suggests he is being viewed more in the Jacobs mold than the Barkley mold. That creates a value buying opportunity for 1.01 rookie picks.

The RotoViz RB Prospect Lab allows us to plug in production and athletic testing variables to find similar players from a projection standpoint. If Taylor’s combine can move him up into the middle of the first round, he compares favorably to a list that absolutely blows you away.

Let this list soak in. Taylor is not near these players, he is above them.

Taylor does not carry the hype Saquon Barkley did entering his rookie season, but he should. College football’s all-time yards-from-scrimmage leader will look to make the same impact at the pro level.

Our own Travis May agrees as he has Taylor ranked as the top rookie in his annual top 100 rookies piece.

Don’t shy away from a generational player. Yes, this class offers much and is especially deep at the wide receiver position. Yes, you can get multiple sound assets throughout your 2020 rookie draft. But don’t let extra picks keep you from acquiring a player who will be a first-round startup player for nearly a decade. Taylor is a priority, not a luxury.

This is Part 2 of the opportunity grades for the rookies receiving significant draft capital from last weekend’s NFL Draft. The first piece covered the…...

It’s our yearly tradition to assign opportunity grades to all players who received significant draft capital in this past weekend’s draft. With the wide receiver…...

What Should We Make of Bryan Edwards? A 2020 NFL Draft Prospect Profile

Bryan Edwards is one of the more divisive prospects in the 2020 wide receiver draft class. Some believe his skill set will demand the NFL…...

This is Part 2 of the opportunity grades for the rookies receiving significant draft capital from last weekend’s NFL Draft. The first piece covered the…...

It’s our yearly tradition to assign opportunity grades to all players who received significant draft capital in this past weekend’s draft. With the wide receiver…...

What Should We Make of Bryan Edwards? A 2020 NFL Draft Prospect Profile

Bryan Edwards is one of the more divisive prospects in the 2020 wide receiver draft class. Some believe his skill set will demand the NFL…...

NFL DFS Lineup Optimizer Week 1: Sifting Through A Slate With Too Much Value

Rescue Your Draft Plan and Avoid the Wide Receiver Deadzone With The Next Tee Higgins or A.J. Brown

Should Drafters Be Worried About Patrick Mahomes’ Protection? The Fantasy Impact of Offensive Line Continuity Entering 2021

I Love Tyler Lockett, But These 4 WRs Replace His Production at a Major Discount