The Jalen Hurts show finally arrived in Philadelphia and was met with rave reviews: 106 rushing yards, a re-energized offense, and, most importantly, a victory over the NFC-leading Saints. The win ended a four-game slide for the Eagles under former second overall pick Carson Wentz, who was finally benched after almost an entire season’s worth of uninspiring play. After getting a much-needed win to stay in the thick of the NFC East race, it came as no surprise when head coach Doug Pederson announced Hurts as the starter for week 15 against Arizona:

Philadelphia Eagles rookie quarterback Jalen Hurts will make his second career start in Week 15 against the Cardinals after leading the team to an upset win over the Saints in his first career NFL start on Sunday. Hurts completed only 56 percent of his passes and averaged 5.6 yards per completion through the air, but his legs were the story, running the ball 18 times for 106 yards. He became the first rookie QB to throw for a touchdown and run for over 100 yards in his first NFL start.

One game, albeit an extremely encouraging one, isn’t enough to tell us whether Hurts is a star in the making or a flash in the pan, so we can turn to Hurts’s college production to try to get a little better handle on the situation. In his pre-draft profile, Jack Miller made a case for Hurts going right around Justin Herbert and well ahead of Jordan Love. While Herbert has exceeded everyone’s expectations and him performing like Herbert is a big ask, there’s still a lot to like about Hurts. He was historically efficient, especially in his final season at Oklahoma, and he racked up 3274 rushing yards over his college career, including 1298 his senior year.

Using the RotoViz Prospect Box Score Scout, Hurts’ top sims are a mixed bag: right at the top you have Dak Prescott, who’s been a strong fantasy QB since entering the league, and Andy Dalton, who had several solid years in Cincinnati. However, right after that you have Tim Tebow, Tyrod Taylor, and Colt McCoy, who all struggled to hold starting jobs throughout their careers.

If anything, this shows Hurts is far from a sure thing long term, which shouldn’t come as a surprise from a second-rounder. However, comps like Tebow and Taylor, while not great for his NFL prospects, are actually a pretty solid sign fantasy-wise. It has become well established that running QBs are cheat codes in fantasy, and Tebow and Taylor exploited this to be very startable QBs when they played. If Hurts can keep up his rushing value alone, he doesn’t even need to be that great at passing to be an upgrade for teams struggling at the quarterback position.

How to Play It

For all the success on the ground in Week 14, Hurts never really got it going through the air. His 167 passing yards (5.6 yds/att) were pedestrian at best, but the rushing saved him to make him QB9 on the day. For comparison’s sake, this stat line was pretty reminiscent of Lamar Jackson’s rookie year after he took over as the starter. Jackson passed for 200 yards just once (and actually ran for over 100 yards, as Hurts did Sunday, only once also), yet still managed to average 21.4 points per game and was at the very least a high-end QB2 every week. While it’s unfair to compare any quarterback to Lamar Jackson when it comes to rushing, Hurts has an opportunity to put up solid numbers on the ground and will likely have more passing volume than Jackson got, as Hurts’s 30 pass attempts were five more than Jackson ever got in a single game his rookie year. I think it’s a reasonable estimate for Hurts to perform in that range: serviceable, but don’t expect league-winning performances. 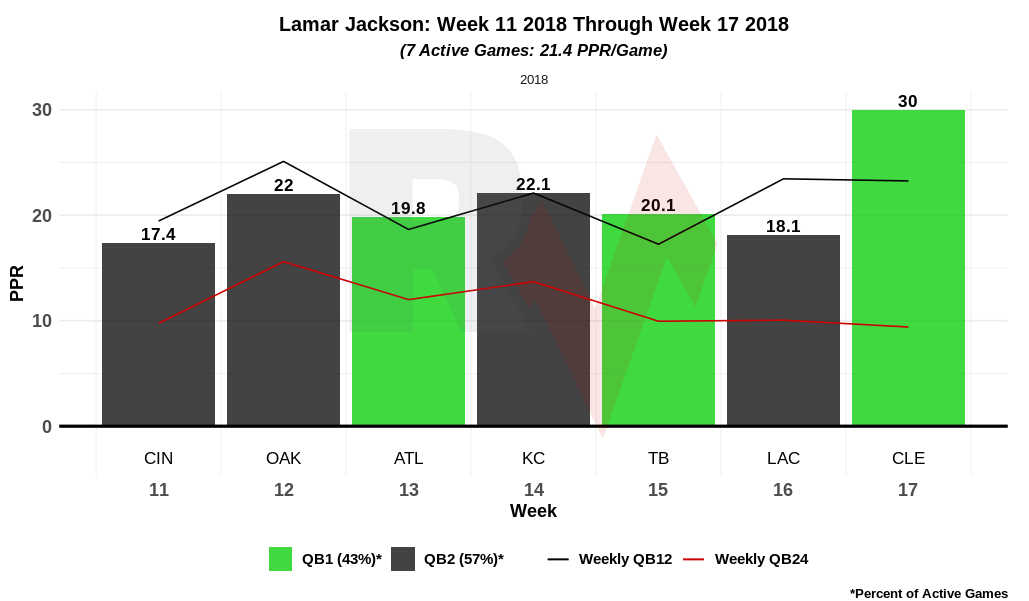 If you do need to stream Hurts at quarterback, however, the schedule looks very nice. Arizona is the fourth worst pass defense in the league and has surrendered 316 rushing yards to QBs this year. Dallas has struggled on defense all year, giving Hurts a nice fantasy championship match up as well. 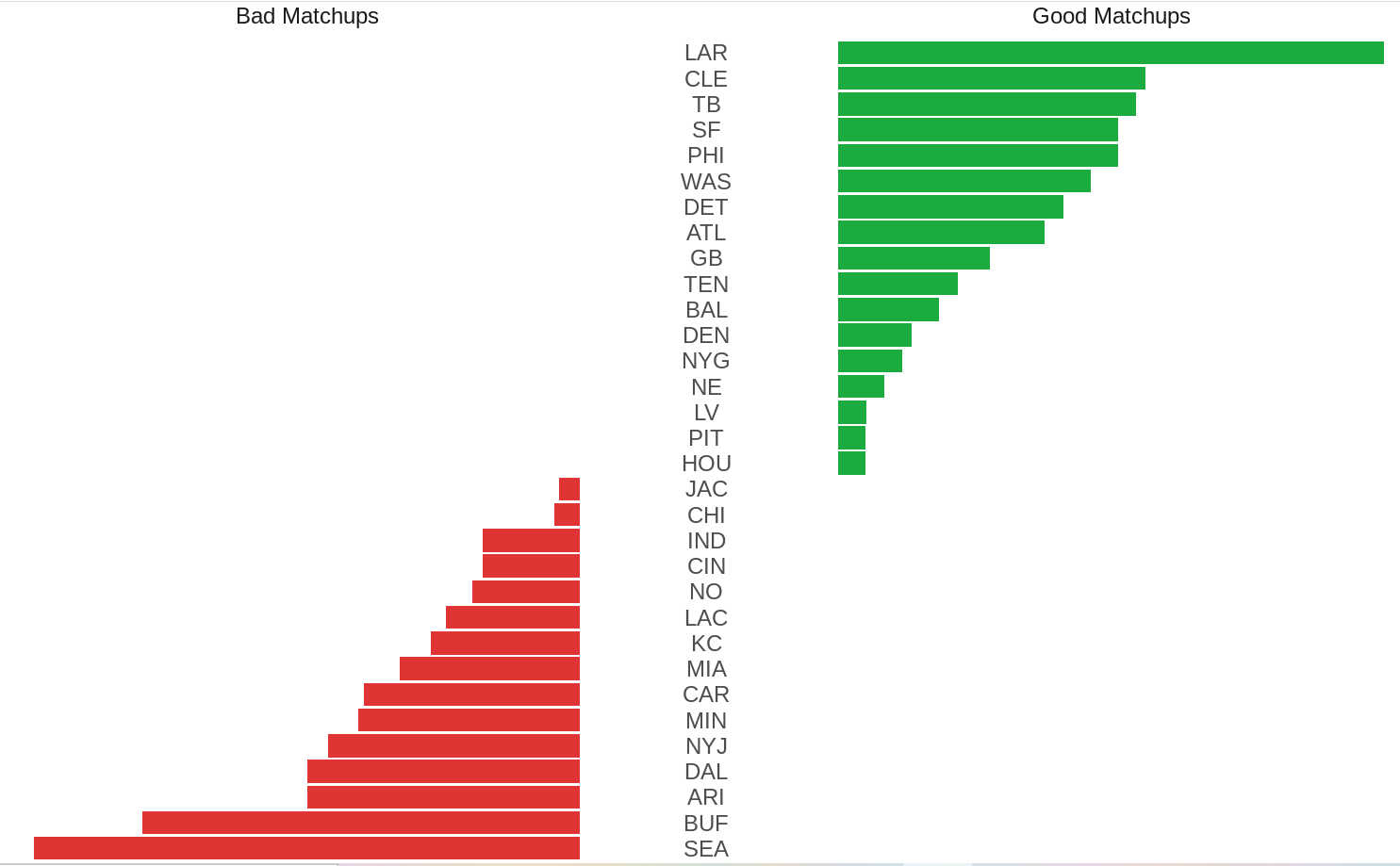 A Quick Look at the Rest of the Offense

Eagles receivers have been an absolute mess this season, and Hurts doesn’t change that. You likely weren’t playing any of them anyway, but given the expected dip in passing volume, the chance of any of them putting up a relevant performance, even in nice upcoming matchups, falls even more. Dallas Goedert led the team in targets and receptions and likely remains a starter simply based on the fact that the tight end position is a mess if you don’t have Travis Kelce or Darren Waller. As the best receiving threat in Philly all season, I expect him to perform relatively close to his previous outputs.

Miles Sanders, on the other hand, has risen from the dead. After a string of abysmal performances, the fantasy first-rounder was largely written off and was a consensus do-not-start against a stingy Saints defense. Sanders responded with the third-best RB performance of the week, tallying 29.6 fantasy points on 115 rushing yards and two touchdowns. Yes, a lot of those points came on an 82 yard touchdown carry, but there’s still a ton of reason for optimism that his value can resurrect. His four receptions tied a season high, and due to the rushing threat of Hurts, more lanes seemed to open up, much like they did for the Ravens backfield in 2018. Most importantly, the offense was moving and energized, more than can be said about it under Wentz. Sanders may still not be the RB1 you drafted, but he’s back to must-start status and has the capability to deliver another matchup-winning performance.

The Process Although I’m filling in for Stefan this week, I’ll be using the same selection process that he has been using all season. In…...

Is Corey Davis Primed for a Breakout?

In The Blitz, RotoViz writers react to the latest news and help you place it within the context of our 2020 research and recommendations. While the

In a week in which it seemed almost everyone got injured, the Broncos were perhaps hit the hardest. Drew Lock will be sidelined for at

The Process Although I’m filling in for Stefan this week, I’ll be using the same selection process that he has been using all season. In…...

Is Corey Davis Primed for a Breakout?

In The Blitz, RotoViz writers react to the latest news and help you place it within the context of our 2020 research and recommendations. While the

In a week in which it seemed almost everyone got injured, the Broncos were perhaps hit the hardest. Drew Lock will be sidelined for at