Shawn Siegele uses the GPS Matchup Rater to help you take down a DFS field or build a roster for the FFPC Playoff Challenge 2.

Last week we used a trio of RotoViz tools to build rosters for the FFPC Playoff Challenge. The 6,250-team field has a $500,000 grand prize and pays out through 700th place.

Blair Andrews used the RotoViz Screener to create full playoff projections, and his team with Hasan Rahim and the Ship Chasing crew employed the optimized lineup from those projections to soar into 17th place after one week. The team Blair and I built using my GPS Matchup article, the insights from Curtis Patrick’s strategy session, and Dave Caban’s GLSP projections sits in 53rd.

Today, I’ll again use Mike Beers’ revolutionary tool to help us get an advantage in the FFPC Playoff Challenge 2.

As we examine QB options, we’re likely focusing on players who are favored to win this weekend, have plus matchups, and project as strong Super Bowl contenders. The Chiefs are a 10-point favorite in the divisional round, giving them the easiest path. They have the highest-scoring regular season QB at 29.1 PPG. That’s not a surprise for Patrick Mahomes, the best player in the NFL.

What about the defensive matchup? 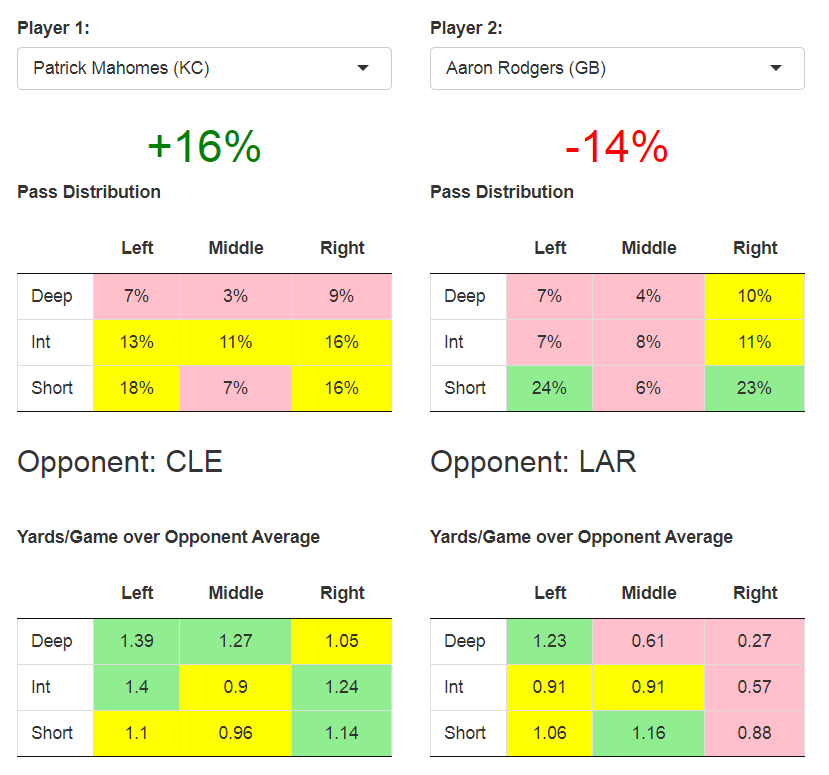 The Browns’ pass defense struggles all over the field, but they’re particularly susceptible to the intermediate left and right, two areas Mahomes targets much more often than a QB like Rodgers. (The Cleveland defense looks a little better in the GLSP analysis due to finishing the season with Colt McCoy, Sam Darnold, and Mason Rudolph.)

Despite Green Bay’s status as a touchdown favorite, Aaron Rodgers makes for a weaker QB option due to his Week 19 matchup and the likelihood of facing the best remaining pass defense in the NFC Championship game.

What happens if we want to create a unique lineup by selecting a hot, underdog QB? 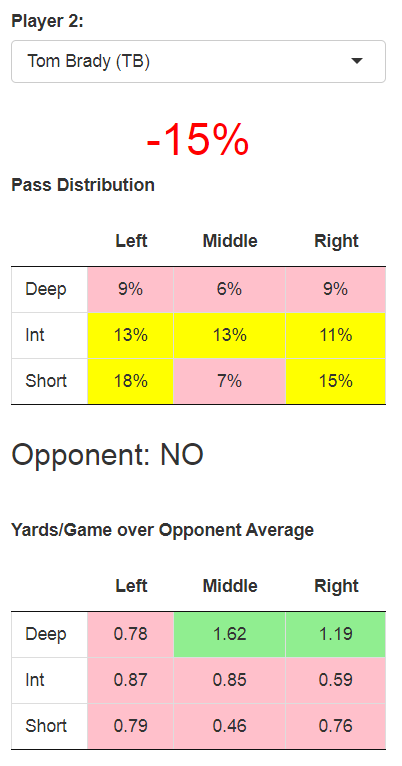 Tom Brady’s matchup offers a preview of what Rodgers could face in the next round. The Saints dominate the short and intermediate zones, leaving Brady with the worst matchup of the weekend. 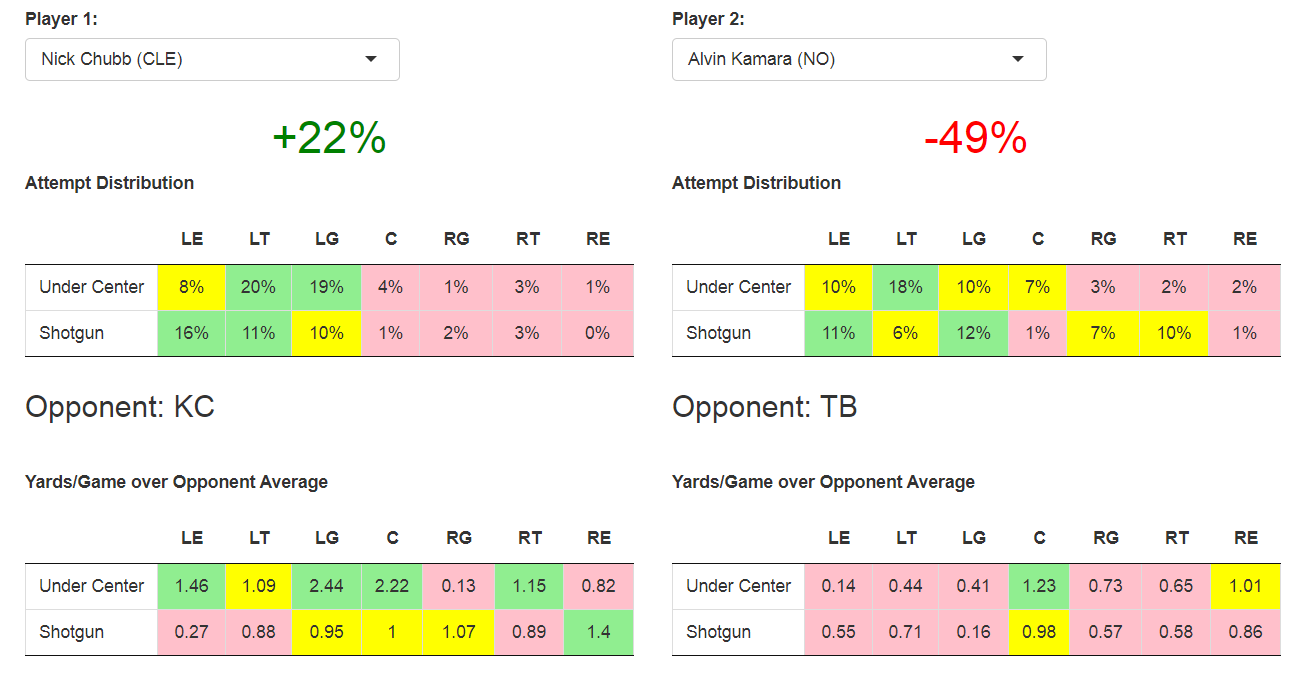 Nick Chubb earns a high percentage of his carries in the areas where Kansas City struggles the most – under center to the left. His combination of talent and matchup make him an intriguing option, especially considering the role he’d likely play in a Browns victory.

Chubb’s outlook is interesting because it shows the value in consulting more than one tool. The Matchup Analysis tab in the NFL Stat Explorer provides Chubb’s results in a variety of game environments. 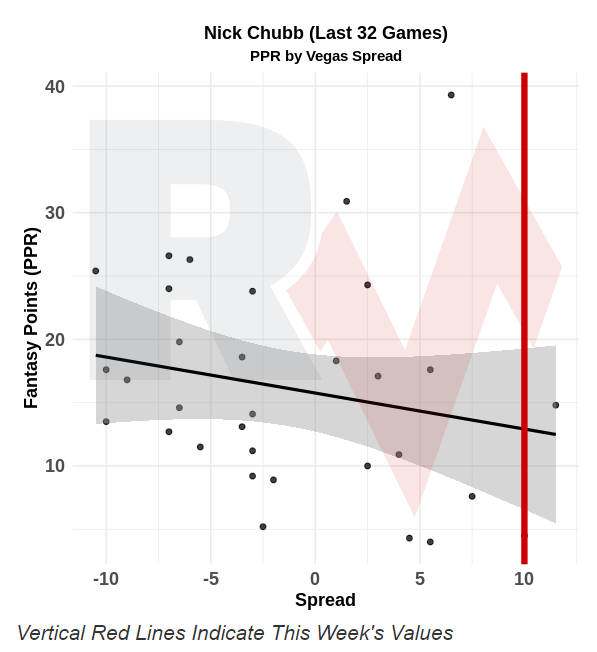 The run-oriented member of Cleveland’s 1-2 punch has historically struggled in games the Browns are projected to lose big. This has been an issue for all Chiefs opponents recently, as Kansas City is allowing only 13.4 PPG to the opposing RB1 over the last five weeks. Chubb still holds the second-best GLSP at RB, but trails teammate Jarvis Landry by a wide margin (16.1 to 12.5). In order to differentiate our lineups, a WR-heavy roster could be the answer.

By contrast, Alvin Kamara’s situation looks bleak but still offers upside in multi-week contests. Kamara faces Tampa Bay’s brutal rush defense for the third time this season. Kamara averaged 25.2 PPG on the year, but only 19.8 against the Bucs. Of course, those are still good numbers, and Kamara can limit Tampa’s effectiveness by doing damage through the air. Kamara will also see his schedule ease, and the double-points week in the Super Bowl projects as a matchup against one of the three best run matchups remaining.

Check out Dave Caban’s look at the divisional round using the Game Level Similarity Projections (GLSP).