The Tennessee Titans have a kicker battle in training camp, with Blake Haubeil and Tucker McCann competing for the job. Neither player has attempted a field goal in an NFL game, so training camp results will matter a lot here, which is why Thursday’s showing from both players was such a disappointment. Turron Davenport of ESPN says that both kickers were 3-for-5 kicking, with both missing their 49-yard attempts and each missing a kick of 40 yards or less. Whoever wins this role won’t be on your fantasy radar in 2021, though at this stage we can’t rule out the Titans looking to free agency to bring stability to the position.

For the first time since tearing his Achilles in October, Tampa Bay Buccaneers tight end O.J. Howard has practiced with the team. Entering his fifth NFL season, Howard — a former first round pick — looks like he isn’t going to fulfill the massive promise that he entered the NFL with, though maybe another year with quarterback Tom Brady can help get Howard back on

The Indianapolis Colts enter the 2021 season without a true No. 1 receiver for quarterback Carson Wentz, as T.Y. Hilton has seen his numbers dip the past two seasons. The team will be looking for second-year receiver Michael Pittman Jr. to be the guy who steps up and takes on that role. According to Zak Keefer of The Athletic, Pittman is ready for that role,

Melvin Gordon III In Line To Be “Clear-Cut Starter”

Denver Broncos running back Melvin Gordon III “is in line to be the clear-cut starter at running back,” says The Athletic’s Nick Kosmider. While the team drafted Javonte Williams and signed Mike Boone, it appears those two will mainly work as relief for Gordon, at least in the early going. Gordon spent last training camp fighting with Phillip Lindsay for that lead role, something that

Teddy Bridgewater Appears To Have Edge In QB Competition

The Buffalo Bills have signed free agent tight end Bug Howard, a 28-year-old from the University of North Carolina. Howard has bounced around NFL teams but has mainly just been a practice squad guy, though he did see some playing time in 2019 for the Atlanta Legends in the Alliance of American Football, as he had 17 catches for 220 yards that season. Howard is

It appears we’re in for a real quarterback competition in New Orleans, with Saints head coach Sean Payton saying that Jameis Winston and Taysom Hill will swap reps daily as the first-team QB. Winston’s received the most praise so far in camp, but Hill’s still a clear threat to Winston in the battle for the starting role. For fantasy purposes, both players have upside if

Los Angeles Rams tight end Jacob Harris will be held out of practice for the next couple of weeks after undergoing a procedure for a core injury. While it doesn’t sound like the injury will impact Harris’ availability for the regular season, he’ll be missing valuable practice time, which is especially important as Harris is a rookie who is converting to tight end. He already

Jacksonville Jaguars second-year wide receiver Laviska Shenault Jr. looks like a different player early on in training camp. Per John Reid, Shenault is “bigger, faster and [a] better route runner” than he was as a rookie. Reid’s report regarding Shenault comes on the heels of persistent positive buzz earlier in the offseason. Between reports backing Shenault’s continued development and highlighting Trevor Lawrence’s impressive camp, the

The Washington Football Team placed wide receiver Curtis Samuel, defensive tackle Matt Ioannidis, and cornerback Chris Miller on the COVID-19 list on Thursday. This comes after Samuel was put on the Physically Unable to Perform list at the start of camp after sustaining a groin injury during the team’s minicamp in June. This isn’t an ideal way for Samuel to begin his tenure with his

Free-agent running back Alfred Morris is visiting the New York Giants on Thursday. He will get into the team’s facility next week and is expected to sign then. The 32-year-old logged 55 carries for 238 rushing yards, and one touchdown over nine games for the Giants in 2020. If he makes the roster, Morris will provide the Giants running back depth and serve as the

The Cleveland Browns will be without wide receiver Rashard Higgins for the next few days. Higgins rolled his ankle during practice on Wednesday and will be out at least for Thursday’s session. Head coach Kevin Stefanski told reporters that Higgins should be fine. With Higgins out, Donovan Peoples-Jones should see some extra reps with the first team. Higgins will attempt to win the WR3 job

Phillip Dorsett II Off To A Slow Start In Training Camp

Jacksonville Jaguars wide receiver Phillip Dorsett II has been shaky in early practices, failing to take advantage of ample opportunities. Per John Shipley, Dorsett “has struggled with the consistency of his hands more than the other top receivers.” The former first-round pick of the Indianapolis Colts is competing primarily with second-year wideout Collin Johnson for the fourth wide receiver job. Dorsett can hardly afford poor 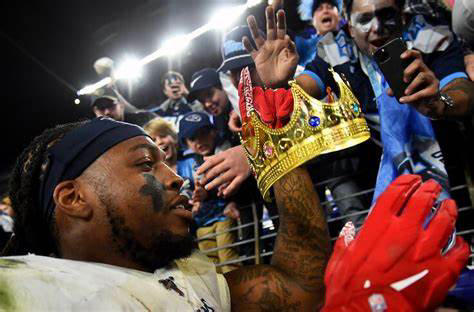 Fanduel Week 3 DFS picks:The Return of The King, and Unleashing of The Rookies.

How to Take Down Underdog’s Week 3 Battle Royale Contests

Mid-Tier Running Back Targets That Will Deliver: CFB DFS Week 4

Fanduel Week 3 DFS picks:The Return of The King, and Unleashing of The Rookies.

How to Take Down Underdog’s Week 3 Battle Royale Contests

Mid-Tier Running Back Targets That Will Deliver: CFB DFS Week 4

The Eagles Will Continue to Soar Against Carson Wentz: Week 3 D/ST Streaming