PGA DFS Game Theory: How To Pick Golfers in the $9,500 and Up Range

I’ve spent most of the past few years diving into different ways to model PGA Tour performance. As with most things, predicting golf exists on a spectrum. On the “most predictable” side of that spectrum, you have things like Driving Distance. It doesn’t really change from event to event with some, rare exceptions. On the other end, we have things like putting performance. The variance is off the charts and it’s a fool’s errand to devote much time to predicting it.

The one piece of information that we can be reasonably sure of heading into a tournament is what a golfer’s potential ownership will be. Each week, I publish the PRK Model results alongside my ownership projections. With that in mind, I’ve decided to do a series on performance versus ownership at different salary ranges. We’ll start at the top with golfers that are priced at $9,500 and up.

What Does Ownership Look Like in the “Stud” Range?

The average ownership of all golfers in this group is 15.5%. I broke out the historical results of this cohort into four equal groups.

As we go through the rest of this piece,[1]and subsequent parts of this series we’ll use these same ownership group names but the numbers may be different across salary ranges. 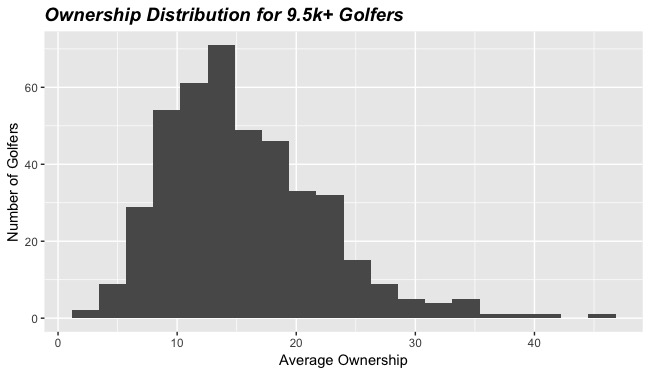 We’ve seen golfers in the stud range go so far as to push 50% ownership in some contests. Dustin Johnson saw the highest average[2]across Single-Entry, 20-Max, and 150-Max contests ownership at just over 46% ownership during the Genesis Open in 2018.

Are We Good at Picking Golfers from this Range?

Short answer? No. We just aren’t. If you’ve ever tried to golf, you know that most of what happens leads to hair-pulling, choice words, and the occasional putter throw. PGA DFS isn’t much different.

In the stud range, you’re looking at razor-thin margins in their ceiling hit rate. The leverage that you gain by having a ceiling outcome from a golfer in the Low-Owned or even Medium-Owned group is what leads to profit in DFS. We shouldn’t really care about their floor because that isn’t what we’re looking for when trying to hit it big in GPPs, but it is encouraging that we essentially aren’t giving up anything in that department either.

When given the option, take the lower-owned golfers at the top of the price range.[3]Or plus-odds in betting matchups There are some rare instances where a “stud” golfer will come in at 5% ownership are lower. It’s only happened on eight occasions but just one of those golfers was able to hit a ceiling outcome. If you see a golfer projected for somewhere between 8% and 14% ownership, that’s the sweet spot that’s worth attacking. It’s anecdotal, of course. But, we just saw this come to fruition with Xander Schauffele at the Charles Schwab Challenge. He finished in the top three from that sweet spot of ownership and appeared in five of the top ten lineups for the Millionaire Maker, including each of the top three.

It’s also worth noting that over the past year of doing ownership projections the r-squared to actual ownership in the biggest 20-Max contest of that given week has averaged out to about 0.84. Ownership is a lot easier to predict than DK Points, in other words. If we can gain leverage in all of our lineup decisions based on the work here,[4]and in the rest of this series then we’re going to be at an advantage over the long-term.