Curtis Patrick shares a look behind the curtain as he openly lays out the planning and execution of his 2020 FFPC Pros vs Joes Draft in hopes of adding another trophy to the RotoViz vault. This is Part 1 of a two-part series.

2020 marks my third year competing in the FFPC’s Pros vs Joes Best Ball Championship. Each year I’ve partnered with my good friend, Ryan McDowell (Dynasty League Football), as our original invite dates back to our Dynasty Command Center days. We’ve spent so much time together planning various fantasy ventures and talking dynasty strategy over the years. It’s been really fun competing in a redraft tournament together, proving along the way that dynasty heads can hang in any crowd. If I recall correctly, our first Pros vs Joes Draft might even have been the first redraft or best ball league he ever played on FFPC.

Pros Vs Joes is a very hotly contested event. Bragging rights are extremely precious, as the field is comprised of some of the most successful fantasy players in the world and top analysts from around the industry. Additionally, each division winner gets a free entry into next year’s FFPC Main Event, which is valued over $1900.

To give you an idea of the tone, the official event overview this year includes the following language:

Who are the real “experts” in fantasy football? Are they the players who risk thousands of dollars in entry fees to enter high stakes fantasy football leagues? Or are they the industry faces who create the articles, podcasts, and player rankings that fantasy players consume?

This is about bragging rights, showing who the best drafters are, and who wants the FREE entry into a 2021 FFPC Main Event (valued at $1,900). You are first or last in this competition. There is no prize for any finish except first in your league. You must draft with that mindset. Go big or go home. Play it safe with your picks, and you will likely be mired in mediocrity.

Ryan and I have enjoyed a good deal of success to-date against this top competition, though we’ve yet to win it.

This year the competition has expanded to add a seventh division, which means there are now 84 teams. A tough climb just got tougher, but Ryan and I feel equal to the task and are very hungry to win after losing our division in the final week in each of the past two seasons.

I thought some of you might find it interesting to read a piece where I shared some notes about what we were thinking during the planning and execution phases of this draft. Maybe you’ll have a lightbulb moment about how you could improve your pre-draft prep. Or, perhaps you’ll get an idea on how to work better with a draft partner. You might even cringe over our misfortune on a few draft targets we narrowly missed on. No matter your reaction, I think you’ll enjoy this narrative-style peek behind the curtain.

I’m going to write this in chronological order because I think it best illustrates the process and the intra-draft audibles and I’m also going to stay in the narrator’s voice because it feels more personal.

We started casually chatting about our strategy the day our slot was announced, which was nine days before the draft.[1]Our live draft took place on Monday, July 27 at 9:00 PM EST Ryan saw the email first and shot me a text. 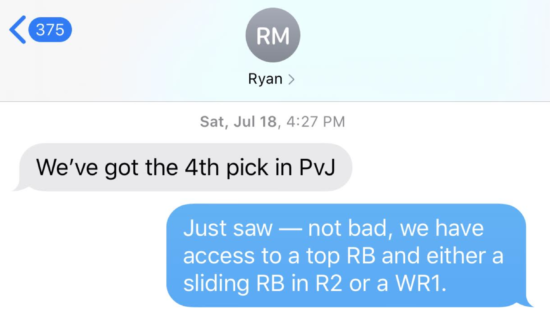 The fourth pick! We’ll be in a perfect position for a modified zero RB build, with an outside shot at two solid RB1s if things bounce our way. Alvin Kamara plus Austin Ekeler or Julio Jones would be our ideal scenario. I fired back, but as I’m typing I see the ellipses indicating Ryan is already doing the same.

Ok, we’re on the same page. I was beyond excited that Ryan offered a soft out on Aaron Jones from the jump. He really only seemed to be mentioning him based on his availability/ADP. I downloaded the latest FFPC Best Ball ADP from our tools, sorted into my tried and true playbook format,[2]sorry for the blurry screenshot — I’m literally sharing images from my phone and shot it back so we could loosely visualize a build. 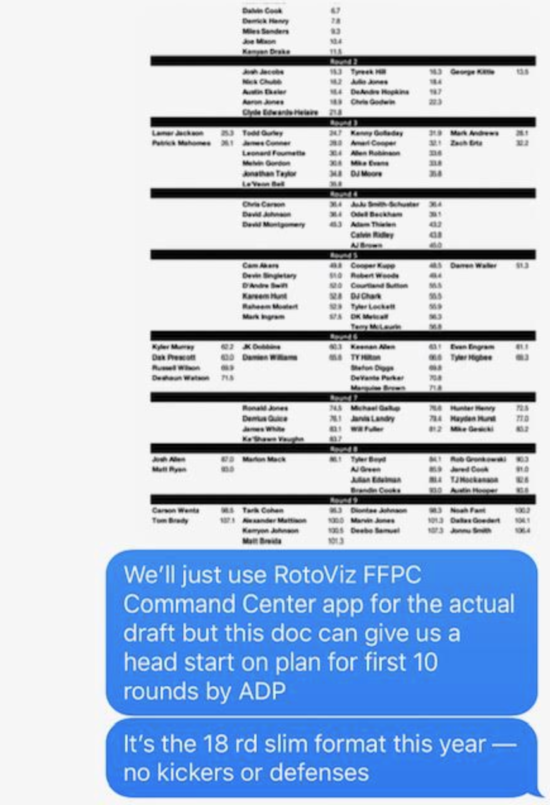 We briefly discuss our opponents. It looks like a very tough field.[3]On the High Stakes Fantasy Football Hour, the hosts speculated our division in 2020 may be the toughest draw they’ve ever seen in the competition due to the strength of the “Joes,” who have combined for nearly $1M in career major purse winnings Our eyes are drawn to Eliot Crist (Fade the Noise), who beat us by just five points in 2019. We also note former Pros vs Joes Champion Jake Ciely (The Athletic). Three of the top high-stakes players in the world found their way into our division, too, in David Hubbard, Gary Allen, and Matthew Lively; each has over $250K in career earnings.

We then check our odds, mostly as a point of pride (yes, there are stated odds for this contest!). 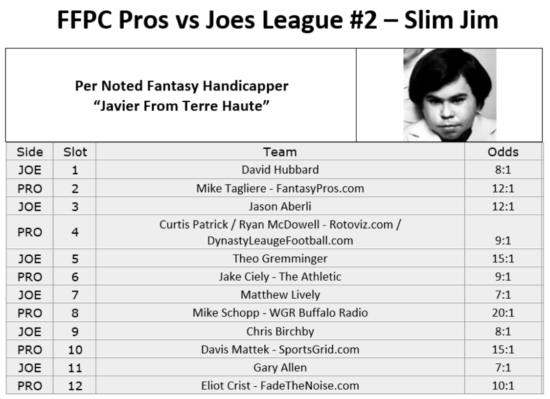 Ok, 9:1, not bad. We’re tied for fifth-best odds in the division with Ciely, a former winner. Clearly the handicapper respects our back-to-back finishes in the top-14 overall and runner-up divisional finishes. We have a great relationship with Crist, and he’s had plenty of fun trash-talking us over the past year after narrowly taking us down. It makes us smile (just a little) that his odds to win are lower. We find our competitor’s mindset.

We plan a video chat for Sunday, July 26.

We opened the video chat by talking about what to do with the fourth pick. We agreed we’d probably end up with Kamara, but we also checked out the FFPC ADP and Exposure Report and noted that there were real drafts where Saquon Barkley and Ezekiel Elliott had fallen to 1.04 within the past two weeks.

Neither of us wanted to pass on one of these top-4 RBs in favor of Dalvin Cook or Michael Thomas, so the plan for round one was set: draft whoever falls to us out of Barkley, Elliott, and Kamara.

We probably spent about 45 minutes talking through our options at 2.09. Here’s a 50,000 feet view of how the conversation unfolded.

Players in the Range That Neither of Us Wants

Players We Think Will Actually Be Available at 2.09 and Will Consider Drafting

Since neither of us likes Edwards-Helaire or Jones, it really starts to narrow the funnel of potential draftees.

At this point we spun off into league-mate scouting. Using a combination of combing the web, Twitter-mining, and our RotoViz Best Ball and Redraft Exposure tools, Ryan and I cobbled together some intel on the drafters most closely adjacent to us and tried to figure out what scenarios could play out between 2.10 and 3.03. Mike Tagliere was easy; his rankings are posted publicly. He’s got Jackson as a top-20 overall player and will be picking at 2.11 and 3.02 after our 2.09 selection. Even if Jason Aberli and David Hubbard both opt to pass on Jackson, it’s unlikely Tagliere will pass on him twice if he’s got him ranked so highly.

Tagliere does not have Mahomes ranked highly; he’s outside his top-50. We veered into the RotoViz Exposure tools and searched for the portfolios of Aberli and Hubbard. Mahomes is owned, but at low levels. We determine there’s an outside shot Mahomes could fall to us at 3.04, so we really shouldn’t reach for him in the second round. Which brings us to …

As we begin looking at our options for 3.04, it becomes apparent this draft has a strong chance of being a modified zero-RB (MZRB from here on out) build, where we select a top-four RB in Round 1 and then wait until after Round 5 (at least) to hit the position again. Again, we’re hoping Ekeler or Chubb makes it to us a 2.09, but neither of us truly believes that scenario will happen. Additionally, neither of wants anything to do with Todd Gurley, James Conner, Leonard Fournette, or Melvin Gordon unless they fall all the way to 4.09.

That leaves us with Mahomes (if he slides) or choice of a wide receiver, probably Mike Evans, Kenny Golladay, or D.J. Moore.

In this edition of Dynasty Trade Targets 2021, Curtis Patrick reviews a 22-year-old potential WR1 who is being valued like a WR4. I love writing…...

In this edition of Dynasty Trade Targets 2021, Curtis Patrick reviews a potential fantasy RB1 who is being valued like an RB4. I love writing…...

In Dynasty Trading, Curtis Patrick journals moves from his own dynasty fantasy football leagues.  I’ve been a trade-hound this month. On the low side, I’ll estimate…...

In this edition of Dynasty Trade Targets 2021, Curtis Patrick reviews a 22-year-old potential WR1 who is being valued like a WR4. I love writing…...

In this edition of Dynasty Trade Targets 2021, Curtis Patrick reviews a potential fantasy RB1 who is being valued like an RB4. I love writing…...

In Dynasty Trading, Curtis Patrick journals moves from his own dynasty fantasy football leagues.  I’ve been a trade-hound this month. On the low side, I’ll estimate…...

Breaking Down a Loaded Best Ball Draft: The Most Provocative Picks from the Industry’s Top Minds

When Is the Best Time to Draft Your Best Ball Tournament Teams?