Game Level Similarity Projections: What Are They and How Should I Use Them?

Dave Caban published this article in Week 8 of the 2019 season. It’s being republished to provide a refresher or overview of the RotoViz Weekly Game Level Similarity Projection process.

Long-time readers are undoubtedly familiar with RotoViz’s Game Level Similarity Projection (GLSP) process but for those of you that are new to the site, this post will walk you through the process and give some guidance on how best to use the GLSP numbers. First, I’ll answer some high-level questions that you might have, then we’ll get into deeper specifics.

Game Level Similarity Projections estimate a range of outcomes for the fantasy points that a player will score in a given week. They are built by reviewing historical games in which players that similar players[1]In this case, players who scored similar numbers of points and accumulated that production in similar ways. to the player being projected faced defenses similar to the one the player in question will face.

In simpler terms, GLSP can help us estimate how Deshaun Watson might fare against the Raiders in Week 8. To build this estimate our GLSP app looks at his production from recent games and finds quarterbacks that previously scored fantasy points in a similar way. The app then finds games where these matching quarterbacks played defenses that allowed passers to produce statistics similar to the 2019 Oakland Raiders.

By reviewing the results of these games, the tool can provide a data-driven estimate of Watson’s likely outcomes.

As you likely inferred, one of the compelling aspects of GLSP is that they allow us to better grasp what a player’s floor or ceiling in a given week looks like. Owners in season-long leagues, with large leads after the Thursday night game, might be seeking safety. With this in mind, they can review the low-end projections of their flex options and go with the player that carries the least “risk.”

Alternatively, an owner may suspect that they’ll need a monster game from one of their players to win their matchup. This owner may look solely at top-end projections as they’re less concerned about poor performances. Having this range of outcomes, that is grounded in historical results, gives one a lot more to consider when setting their lineups than a projection set that includes just a single data point.

The other challenge with the single-data-point approach is that this number is likely an average and probably lacks some important context. If we sit down and develop projections for all fantasy-relevant players, odds are high that we’ll more or less end up projecting the overwhelming majority of players with stat lines or point totals very close to their seasonal average.

What we’d rather do is consider how each player will perform against the particular opponent he is facing that week. To do this, we would likely look at games in which the player in question previously faced his weekly opponent or we would think of similar players and search for instances where they matched up against that defense. If we’re going to do this anyway, why not really go for it?

Like any forecasting method, GLSP is not perfect. There are a couple of limitations within the process and important things to keep in mind when you use the results.

THE GLSP PROCESS IN MORE DETAIL

A ton of calculations are made in the GLSP process but overall it’s actually pretty simple. Let’s take it a chunk at a time:

The below process is repeated using two weeks, four weeks, and six weeks for the average stat lines. At the beginning of the season, games from the previous year will be included for veterans, as necessary. Week 1 projections are not created for rookies as there are no NFL data from which they can be based on. However, beginning in Week 2 and extending forward, available NFL games will be used to generate GLSP.

The best way to use GLSP results is to consider them in the context of each individual player. They are useful for quickly gauging player prospects and getting a sense of weekly rankings but are most powerful when used to consider an individual player or compare a handful.  For example, If Patrick Mahomes is sidelined and you believe it negatively affects Travis Kelce, consider his 25th to 50th percentile point totals when choosing to start him. Alternatively, if you think Chad Henne will lock onto him, use him as a security blanket, and target him in high-leverage situations his 50th to 75th percentile totals should be considered.

You might ask how helpful this is — why can’t they just give me an answer? If only it were that simple. Forecasting players is a challenging game and the abundance of factors that can influence a player’s fantasy totals creates a tremendous amount of variance. Recognizing that this variance exists and having a better sense of its variability goes a long way toward making more informed decisions. Also, GLSP does not have to be your final answer. It can help to confirm or question your original position.

In order to understand what we’re looking at, let’s again review Watson’s Week 8 projection from last year to clear up any questions you might have. The average stat line presented is not Watson’s 2019 average stat line. Rather, it is representative of the average statistics produced in the matching games. This means that on average, players like Watson throw for 261 yards when facing defenses like Oakland’s. 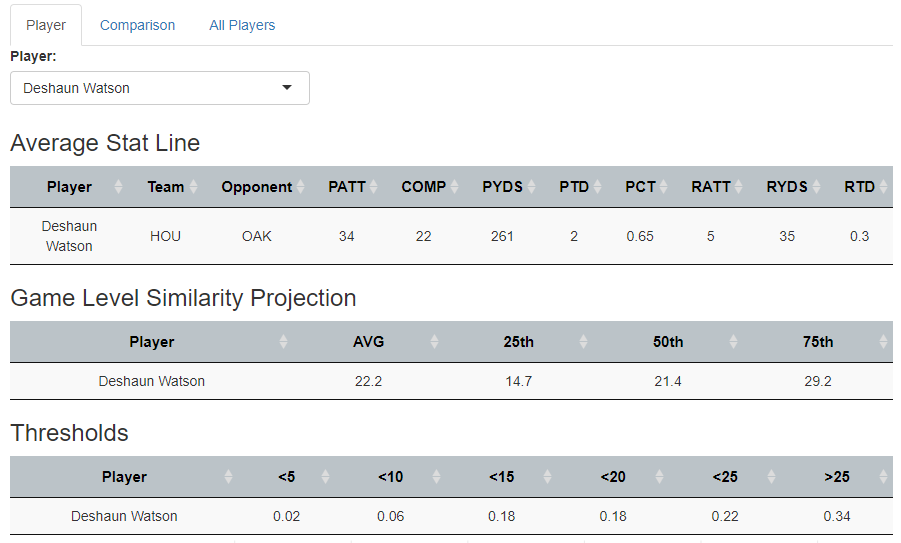 The graph visually buckets these percentages. Naturally, we want the area that the bars occupy to be as far to the right as possible.

This is a strong projection but shouldn’t come as a surprise. Watson had scored more than 25 points in four of seven games and the Raiders were notably forgiving to opposing passers allowing an average of more than 28 fantasy points in the last five weeks. 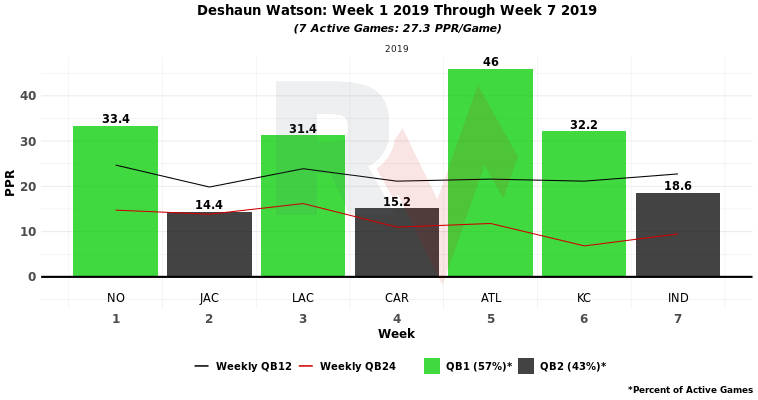 2021 Breakaway Rush Scores: The Backs That Exploded In One of Our Most Important Metrics

Dave Caban unveils his 2021 RB Breakaway Rush Scores — a metric that has proven to be one of the most predictive measures of NFL…...

The Makings of An RB1: How to Maximize Your Chances of Selecting Elite RBs in Dynasty

D.K. Metcalf turned heads and raised his draft stock at the 2018 NFL combine by displaying an incredible mixture of straight-line speed, leaping ability, and…...

2021 Breakaway Rush Scores: The Backs That Exploded In One of Our Most Important Metrics

Dave Caban unveils his 2021 RB Breakaway Rush Scores — a metric that has proven to be one of the most predictive measures of NFL…...

The Makings of An RB1: How to Maximize Your Chances of Selecting Elite RBs in Dynasty

D.K. Metcalf turned heads and raised his draft stock at the 2018 NFL combine by displaying an incredible mixture of straight-line speed, leaping ability, and…...

Is Ja’Marr Chase the Best Wide Receiver Prospect Since Amari Cooper? The Updated Prospect Lab Has a Strong Opinion

What Metrics Are Most Important for WR Evaluation? Machine Learning Provides Several Surprising Answers – The Wrong Read, No. 68