Shawn Siegele projects the first-round in fantasy football redraft and dynasty formats for 2021, and tells you where players should go instead.

Over the last month, we’ve been focused on rest-of-season rankings and dynasty trades to help fuel a deep playoff run. With FFPC league playoffs ending, most other playoff formats beginning, and the majority of trade deadlines passed, this is a fun moment to look to 2021 and make some predictions.

Today I’m projecting the first round for redraft and dynasty in 2021. I also offer my take on where players should go if you want to win your league. I’m occasionally surprised by the RB-heavy nature of drafts.[1]In my post-NFL draft projection of 2020 rookie drafts, I was higher on WRs than the eventual ADP that emerged. On the other hand, my projections were much closer to the value that eventually emerged. Of course, this was exaggerated in 2020, and we’ll probably see a return to “normal” after this year’s RB bloodbath. But normal still offers plenty of exploitable opportunities.

We can refresh ourselves on the 2020 results through the FFPC ADP in our redraft and dynasty tools. Not every format is identical, but with a 2-RB, 2-WR, 2-Flex starting lineup, the FFPC gives us a good neutral format, while allowing us to draw on the wisdom of experienced players with money on the line.

Only a single WR went in the first round of 2020 startups as stars like Davante Adams, Tyreek Hill, and DeAndre Hopkins were passed over in favor of rookie RBs and second-year hopes.

Adams joins Michael Thomas at the WR position in redraft, a good choice for those drafters.

For simplicity, the overall projections are also in a table at the end of the article.

Should Be: Christian McCaffrey

Should Be: Christian McCaffrey

I don’t anticipate much debate on McCaffrey. Since the beginning of 2018, he’s averaging 27.1 PPG. You have to drop all the way down to the 21-point range to find the next group of players in Adams, Alvin Kamara, Dalvin Cook, Saquon Barkley, and Thomas.

McCaffrey will turn 25 next summer and begin to enter the danger zone for RBs, but his point gap is worth the bet on a long career despite the 2020 injuries.

Should Be: Davante Adams

You can’t go wrong with either Kamara or Adams, and you may prefer the advantages of a Single Elite RB build. Both face minor red flags in 2021. Combined with the normal difficulty of maintaining such gaudy numbers, we can expect lesser scoring performances next year, but owners will covet even lesser versions of these superstars.

Not surprisingly, Adams impresses in almost every statistical category. He’s tied with Tyreek Hill in touchdowns (13), leads the NFL in target share (33%), ranks top-five in yards after the catch (419) and top-10 in air yards share (37%).

If you think that type of overall resume puts him in rare company, you’d be right. Over the last 20 years, no WR has averaged more PPG over the first 13 weeks, and that includes historic seasons like Marvin Harrison’s 143-catch year, Randy Moss’s 1,493-yard, 23-TD explosion in his debut with the Patriots, Calvin Johnson’s follow-up campaign to the 1,900-yard season, and the first of Antonio Brown’s back-to-back 391-point seasons.

A small note in favor of drafting the WR: When Brown was being selected in the 1.01/1.02 range, he was much more consistent in delivering elite win rates than were similarly drafted RBs.

Should Be: D.K. Metcalf

In 2021, Metcalf will be a 23-year-old force of nature tied to a quarterback who made Doug Baldwin the most efficient WR in the NFL from 2015 to 2017.[2]He bested even Brown with 183 fantasy points over expectation in that time. Metcalf leads the league in air yards (1,434) and his ability to haul in these deep passes means he also leads in actual yards (1,119). He’s added 300 yards after the catch to go with his vertical profile, and his run-after-catch ability has aided in scoring nine TDs.

Metcalf has done all of this with a 23% target share. Imagine what the numbers would be like if he could boost it even to the 26% range.

Should Be: Alvin Kamara

I’m sympathetic to selecting Barkley in this range. No rookie RB season in the last 20 years has been within even 2.0 PPG of his 24.1 in 2018. He’s also one of only four backs to score at least 14 PPG and average at least 5.0 receptions. The other three are Reggie Bush, McCaffrey, and Kamara, and we know where the latter two sit in our rankings.

Even with the disappointing results and injuries from the last two years, Barkley has the third-best PPG average and the second best Expected Points (EP) profile over the three-year span. He’s not quite to the double-double averaged by McCaffrey, but at 9.7 ruEP and 9.6 reEP, Barkley is a unique weapon.

Should Be: Alvin Kamara

Should Be: Dalvin Cook

Should Be: Tyreek Hill

With his monster game in Week 12, Hill now has seven games with 30 or more points in the past three seasons. He has 11 additional games with at least 20 points. He’s now in a virtual dead heat with Thomas in PPG over that span and has edged ahead of Ezekiel Elliott. 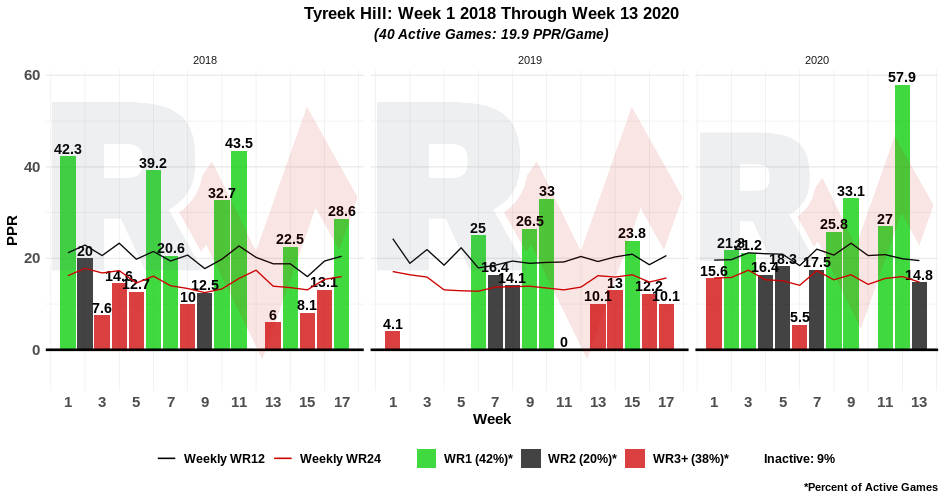 As was the case with Metcalf, Hill has a high floor/ceiling combination because he can manage all of this with a 24% target share.[6]The Chiefs rank fifth in the NFL with a 58% pass percentage when leading, which is important since they lead a lot. Due to his speed and Patrick Mahomes’ genius, he ranks fourth in targets, first in TDs, first in total points, and first in FPOE.

Hill will turn 27 next spring, but WRs hold their actual value and trade value much better than RBs in this age range. You can play Hill for another year or two and likely still trade him at peak value.