We’re heading back to TPC Sawgrass for The PLAYERS Championship. It’s a course that many of us are familiar with. If you want a look at how the field shakes out in Expected Birdies this week, check out yesterday’s article.

We’re sitting here with another event where Rory McIlroy ($11,700) is just simply lapping the field in PRK Score. Even in the strongest field of the year, by just about any metric, McIlroy is far ahead of his closest competitor. As far as Raw PRK Score goes, Rory is at -2.40.[1]Raw PRK Score is a way to compare how golfers are expected to score compared to an average Tour golfer on a neutral golf course per round. The closest guy in the field to McIlroy is Justin Thomas ($10,800) and he’s at -1.83. That implies at least a 0.5 stroke advantage per round for McIlroy over everyone else in the field. On courses longer than 7,200 yards, McIlroy sees a slight bump in all of the major statistics we’re focusing on.

Rory has seven straight top-five finishes. If you expand that out to top 10s, you’re looking at 12 of his past 14 starts. He’s a buy.

Dustin Johnson ($10,000) has been a bit of an enigma lately. The rollercoaster ride from T57 all the way to a runner-up on the Euro Tour back to a T48 in Mexico has been something else for the No. 5 OWGR. It seems as though he’s picking up some steam as a trendy outright bet around the industry. I’m more likely to play the game theory angle this week because of the carnage that we typically see at TPC Sawgrass. DJ has played well here in the past, but that isn’t enough for me to click on him. I won’t completely fade him but I imagine I’ll be considerably underweight compared to the field.

Make sure to check out this week’s Bogey Free for our over/under picks on:

The Raw PRK score has Berger about 0.2 strokes per round better than Stenson. With Berger, you need to strike while the iron’s hot. He’s a streaky golfer and has gone through stretches where he looks like a top talent and other stretches where it looks like he needs a GPS to find greens. The longer-term numbers for Berger don’t look incredible because of the slump that he went through as he fought through some issues last year, but I think he’s worth a long look this week.

Webb Simpson ($9,200) comes into the week with the fourth-highest PRK score. Since this event last year, Simpson only has two finishes outside of the top 30 in stroke-play events. He’s criminally under-valued from a cut-making perspective. Since the start of 2018, Simpson has nine different top-three finishes including a couple of victories. Finding a way to get exposure to him is a must this week. Justin Thomas is another guy near the top that could go slightly under-owned. He’ll certainly be less owned than McIlroy and I don’t think their range of outcomes is all that different.

Hideki Matsuyama ($8,800) is too cheap. It feels like he fits in a bit better with the mid-$9,000 golfers but we’ll take the discount. Matsuyama comes in with an 83 PRK. Historically, golfers in the 80s have performed really well, finishing in the top 10 just over 20% of the time and hitting the DK Bonus nearly 62% of the time. He’s been held out of the winner’s circle since 2017. But, he’s made 53 of 59 worldwide cuts in that span.

Down in the $7,000 range, we have Scottie Scheffler ($7,500) who’s coming off of a T15 finish at the Arnold Palmer. We need to continue to take advantage of 7k Scheffler because this might be the last time we see him in this price range. He’s 11th in the PRK Score this week with a 77. Per the Splits App, Scheffler is gaining 1.7 more SG: Tee to Green over his last three events than his first 21 events on Tour.

The Optimizer is up after countless hours from the app team! Make sure to check it out yourself, but I’m going to look at this week’s field and optimizer results through a few different lenses. To start, I’m going to run 100 lineups with no constraints.

Even the optimizer is forcing Rory in. With no other constraints set, it built 99 McIlroy lineups out of the 100 it created. The optimizer is quite keen on Erik Van Rooyen ($7,200) as well. I’ve included all the golfers that appeared in more than 5% of lineups. In order to get a picture of more realistic exposures, I’m going to limit it so that no single golfer can break 50% exposure.[2]Go to “Configure Your Lineups” and change the “Global Max Exposure” to do this. 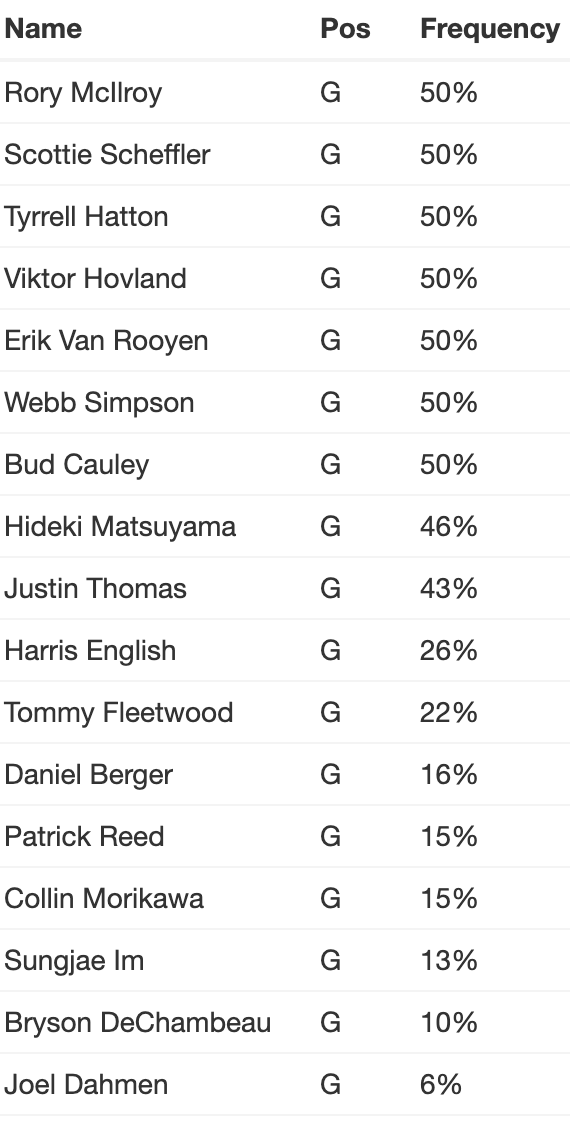 Rory and EVR still pop in this run of the optimizer. Notably, Matsuyama, Thomas, Berger, and Tommy Fleetwood ($9,000) see their exposure increase.

Here’s a summary of how the cash locks have performed so far this season: 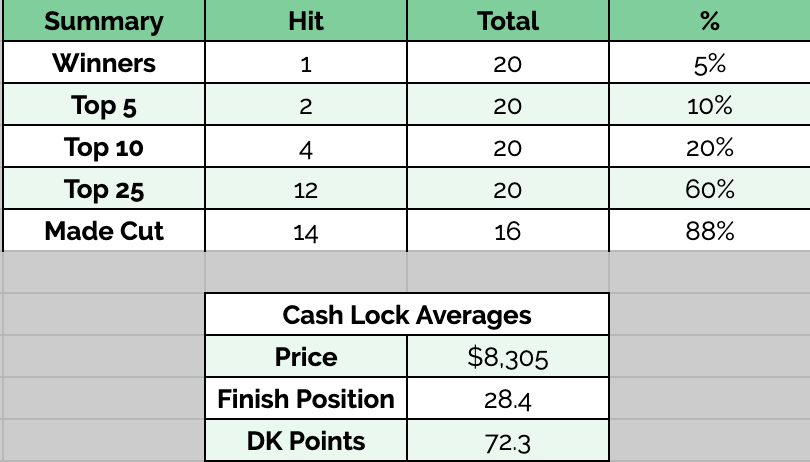