As the playoffs begin in earnest, Shawn Siegele discusses the seismic events from Week 14 and details why the rich continue to get richer in dynasty.

The 2020 fantasy playoffs started off with a blast. Players from almost every position are challenging history, but they’ve got a fight on their hands just to win individual leagues. In this double edition, we’ll profile some of the biggest moves, check in on our recent recommendations, and illustrate how the RotoViz tools are helping owners reload-on-the-fly throughout the year. Then in the Dynasty Workshop section, I’ll look at a hidden trend that’s helping the rich get richer in dynasty leagues.

Other Recent Entries in the Dynasty Workshop

Week 14 Heroics and How They Fit

A Scheduled-Fueled Run to History?

Derrick Henry was the headliner with 215 rushing yards and another pair of scores. He becomes the fifth RB in the last 20 years with 1,500 yards through 14 weeks.

Chris Johnson, Jamal Lewis, and Adrian Peterson all eclipsed 2,000 yards rushing. Of course, the holy grail is Eric Dickerson’s rushing record (2,105) that has stood since 1984. Henry’s ridiculous finishing schedule gave him a boost in our playoff RB rankings, and it could be the key to breaking the unbreakable.

The Best Receiver in the NFL is an Aging TE

Ten receivers have now gone over 1,000 yards for the season, but the leader comes from a surprising position.

In last week’s look at the battle between RBs and WRs for first-round domination in 2021, I left Travis Kelce off the list, but he’s a surefire pick in the initial stanza. He doesn’t lead the NFL in receptions – that goes to RotoViz favorite and Madison Parkhill league-winner pick, Stefon Diggs – but his 1,250 yards are 70 more than the closest WR.

Kelce is currently averaging 96.2 yards per game, 7.0 more than the best historical pace through 14 weeks. Kelce and George Kittle jumped ahead of Rob Gronkowski and Jimmy Graham in 2018 and now the Chiefs star is poised to push the record to even greater heights in 2020. He needs only 128 yards to break Kittle’s record.

The exploits from Kelce reinforce the Best Ball Workshop lesson: How Elite TEs Supercharge Your Win Rates. While Week 14 isn’t over, he entered the week with a lofty 23% win rate. 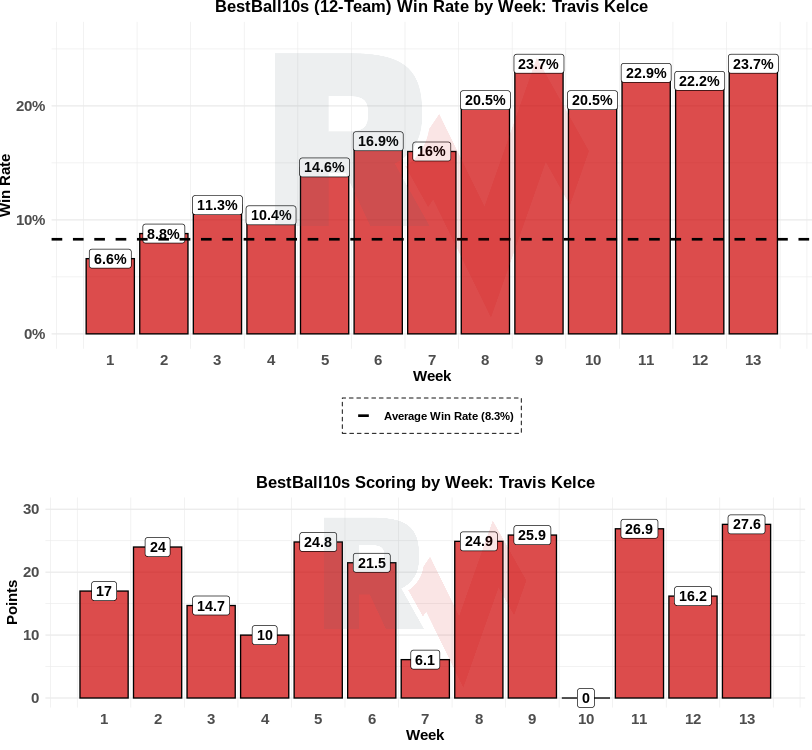 Kelce owns the best win rate in the NFL, edging other 20-percenters, James Robinson, Alvin Kamara, and Justin Jefferson, all of whom are likely to fall slightly after this week.

Two weeks ago, we used Tyreek Hill to help dispel the WR playoff upside myth. No receivers hit 30 points during the fantasy quarterfinals, but 13 scored 20-plus, including the aforementioned Hill. 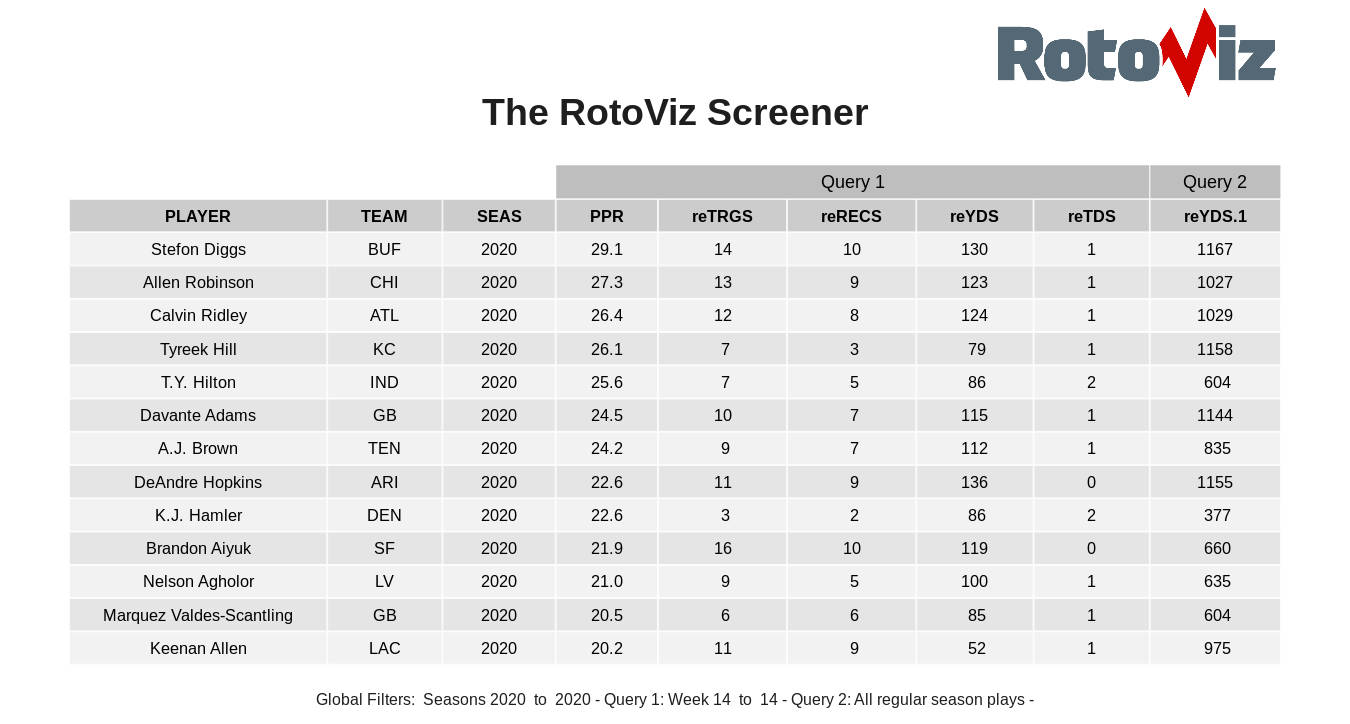 Hill and Davante Adams continue to justify top-five selections in 2021 drafts, while Diggs and Keenan Allen battle for the receptions lead.

In discussing the foundational tactics of Zero RB, the key is to be able to start four such elite WRs. Blair and I won our FFPC Main Event with an avalanche of WR points in the final, and those receivers pushed us to No. 33 overall (temporarily) in the first week of the Race to half a million.[1]For those who haven’t been following along, we didn’t draft an RB until Round 11, but we did land six elite WRs, allowing us to overcome Julio Jones’ injuries and Will Fuller’s suspension. 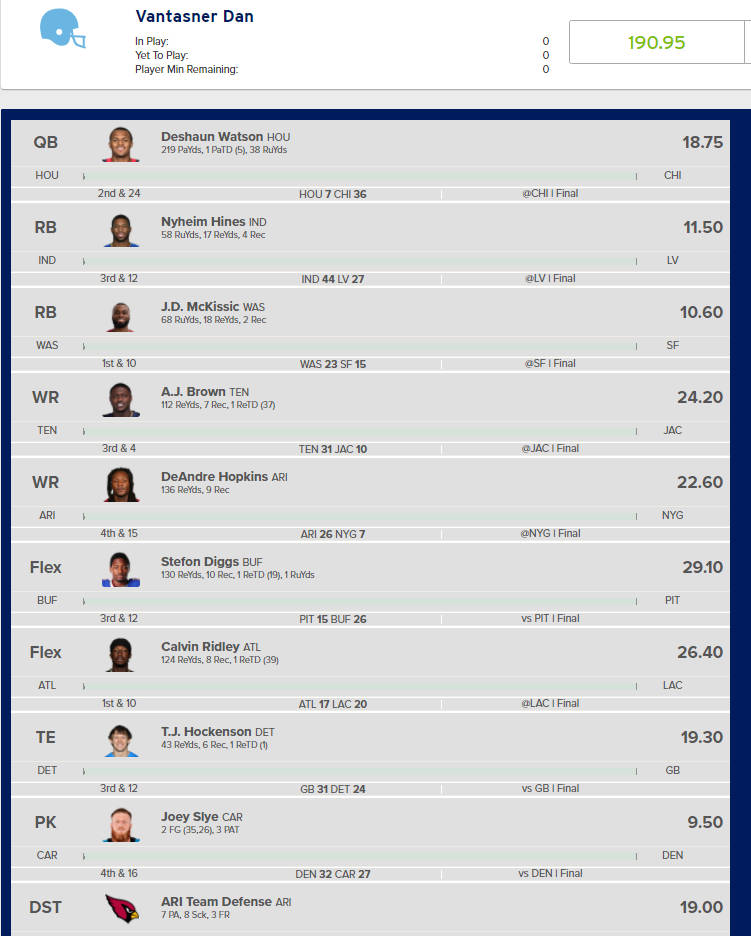 With seven games of WR2 or better value, Brandon Aiyuk can hardly still be a sleeper, yet he’s un-owned in more than 20% of ESPN leagues. Aiyuk has missed games both to injury and to stints on the COVID list, but his 15.8 PPG average sits at WR17.[2]I didn’t include Aiyuk in the first-round of my 2021 dynasty startup projections, but he has a chance to eventually supplant Justin Jefferson, CeeDee Lamb, Tee Higgins and a host of others for the top spot from this class. 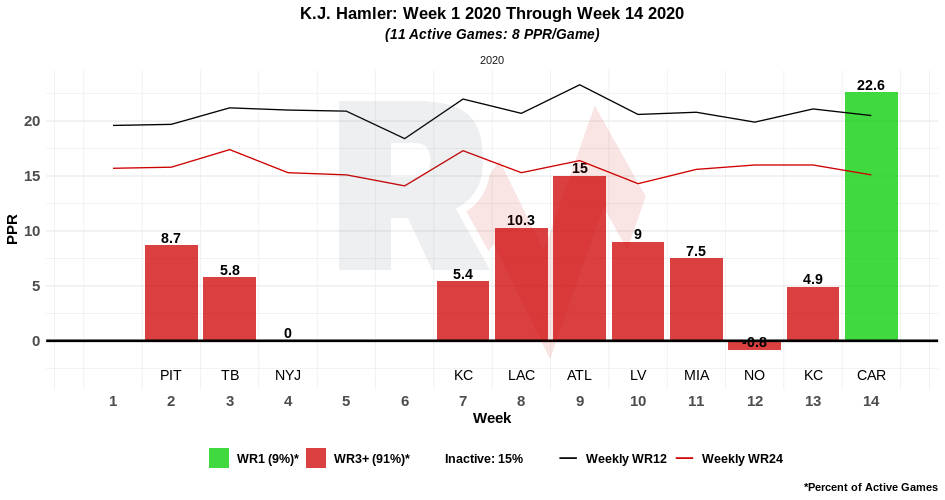 Hamler scored 37- and 49-yard TDs on his two targets Sunday, but the volume has also been better than that suggests. Over the last two weeks, he’s in a 9-8-8 target split with Tim Patrick and Jerry Jeudy, but he has more air yards (158) than his teammates combined. That follows back-to-back 10-target appearances in Weeks 9 and 10. Hamler profiles as an intoxicating mix of DeSean Jackson and Brandin Cooks. This should be just the tip of the iceberg.

According to the WR Prospect Lab, Aiyuk and Hamler ranked as the No. 3 and 5 WRs in this loaded class, far better than where they were selected in rookie drafts at WR9 and 13 respectively. Our research suggested Aiyuk, Hamler, and Chase Claypool were all among the best values from this draft.

Montgomery broke free for an 80-yard TD against the Texans, something even his ardent fans were not expecting.

But we did expect Montgomery to turn his season around during this current stretch. In labeling Montgomery as a must-acquire player for the 2020 playoffs and a subsequent 2021 offseason dynasty flip, I pointed to the way his schedule was going to morph from weight vest to trampoline.

For someone who began his career with such a devastating stretch of negative-efficiency performances, the contrast in this recent hot stretch is mind-melting. 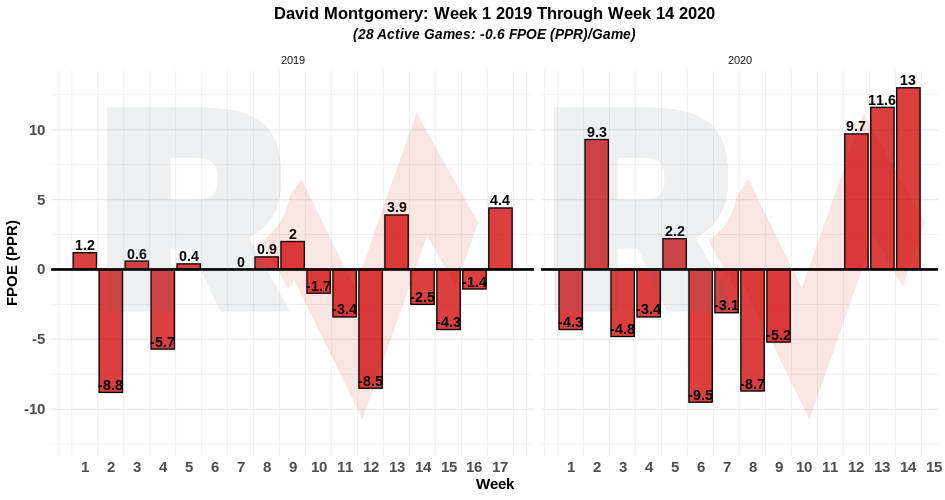 I would maintain a healthy skepticism about Montgomery long term, which includes following through on my original suggestion to flip him in the offseason. I do expect owners to get a good price, as Montgomery’s recent stretch combines with RB desperation to push his ADP ever higher in 2021.

Chuba Hubbard returned for a final season in 2020, but his performance cratered. He’s now a much cheaper selection in startups and rookie drafts. Shawn Siegele…...

Jermar Jefferson’s pro day reinforced his status as a Day 3 prospect, but his on-field performance paints him as a first-round pick. Shawn Siegele explains why…...

Javonte Williams didn’t wow observers with a 4.55 forty at his pro day, but that’s not the entire picture. If you buy Williams today, will…...

Chuba Hubbard returned for a final season in 2020, but his performance cratered. He’s now a much cheaper selection in startups and rookie drafts. Shawn Siegele…...

Jermar Jefferson’s pro day reinforced his status as a Day 3 prospect, but his on-field performance paints him as a first-round pick. Shawn Siegele explains why…...

Javonte Williams didn’t wow observers with a 4.55 forty at his pro day, but that’s not the entire picture. If you buy Williams today, will…...

Is Ja’Marr Chase the Best Wide Receiver Prospect Since Amari Cooper? The Updated Prospect Lab Has a Strong Opinion

What Metrics Are Most Important for WR Evaluation? Machine Learning Provides Several Surprising Answers – The Wrong Read, No. 68